Ronald Reagan Washington National Airport, across the Potomac River from the nation's capital, will undergo a massive $1 billion renovation, its managers announced this week. 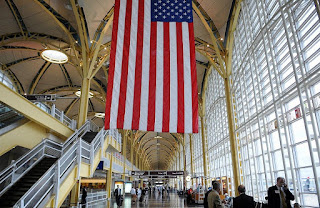 The airport in Arlington, Virginia turned 75 years old this month. Despite its being in better condition than other major airports, such as New York's La Guardia, the Metropolitan Washington Airports Authority plans to add 1.1 million square feet to the airport.

The added space would shorten security lines and improve customers' experiences while traveling, the authority said.

More than 23 million passengers used National last year, making it the second-busiest airport in the region, after Baltimore-Washington International Marshall Airport. Last year was its sixth straight year of record-high passenger traffic. And there is little indication it will taper off.

And that’s the problem. 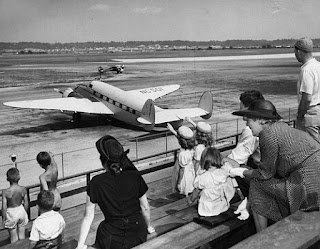 Such phenomenal growth was not part of the original plan for the airport, which sits on 860 acres of infill in the Potomac River.

But in the years since President Franklin D. Roosevelt watched the first American Airlines DC-3 aircraft touch down on the runway, the airport has grown in ways that few could have anticipated. It now serves more passengers than Dulles International — an airport 14 times its size.

The irony is that while airport officials have fought against growth at National, they have been forced to accommodate it.

They have reconfigured space, even re-purposing storage closets and conference rooms to manage the passenger boom. In 2014, they spent $37 million to remake historic Terminal A, adding security lanes and brightening the interior.

This fall, they will break ground on the airport’s biggest building project in nearly two decades. The centerpiece of the ambitious $1 billion program will be a new commuter concourse on the airport’s north side.

The building will replace Gate 35X — a notorious choke point where travelers, in rain, sun or snow, are required to board shuttle buses to get to their planes.

"Over the next four years, there's going to be a transformation of the passenger experience at Reagan National to decrease congestion near the gate and to improve passenger flow through the terminal," said MWAA spokesman Rob Yingling.

The authority released a video that shows security checkpoints being moved and housed under the roadway west of the airport, toward Crystal City.


Some of the checkpoints will be underground and have natural light coming in through glass ceiling panels. Terminal C, which currently houses the airport's executive offices, will be transformed to hold short-hop flights.

The authority said much of the construction will be done overnight so as not to interfere with airport traffic. The work will not begin until spring 2017 and is expected to be completed by 2021.

Posted by ElectricWeb-Atlantic at 8:49 AM No comments:

The 21-year-old Charlotte Convention Center will get a $100 million renovation over the coming years, according to Charlotte Regional Visitors Authority. 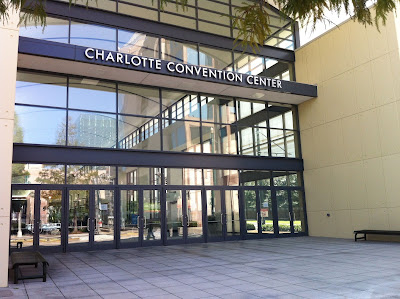 Under the plan, the convention center’s footprint would not expand onto new property, at least not in the short term. But the center’s meeting space would grow by about 34,000 square feet, mostly by rebuilding the center’s facade facing Stonewall Street.

Tom Murray, CEO of the visitors authority, told council that a combination of changes in the convention business and the age of the building make the changes necessary.

The convention center, bounded by Brevard, Stonewall and College streets and Martin Luther King Jr. Blvd., opened in 1995 and cost $150 million to build.

An 18-month study by Jones Lang LaSalle Destination Planning Services and architect TVS Design led to the initial concepts introduced in late September. Murray told the council that the Visitors Authority will next refine the nine recommendations and sharpen the construction budget.

The $100 million figure is a rough estimate, Murray said.

The convention center today is focused on large exhibit space. Those are the large, unfinished rooms in the center’s lower floor, with 30 foot ceilings. 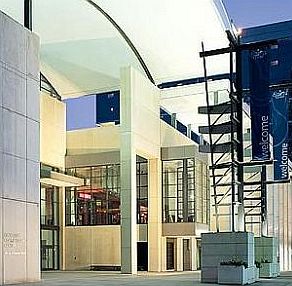 Only 18 percent of the Charlotte center is for smaller meeting space. Murray said newer convention centers have as much as half of their space dedicated for meeting space.

“Our market has changed,” Murray said. “It’s less exhibit focused. It’s more meeting focused. In the past meeting planners wanted four white walls and keep everyone out. Now they want an authentic feeling about Charlotte.”

Council members responded with enthusiasm to the plans, which include a pedestrian bridge and so called linear park to be built on both sides of the existing light rail bridge across Stonewall St., a project that would provide better access for convention attendees staying at The Westin.

A park style pedestrian space on each side of the light rail bridge would also provide direct access to the Whole Foods anchored development — Crescent Stonewall Station — opening next year.

The Visitors Authority envisions those projects as a likely first phase that would begin as soon as next summer, the start of fiscal year 2018.

Additional work would be completed in stages as part of a five-year renovation, including the conversion of an outdoor terrace into a flexible, enclosed, atrium style space along MLK Blvd., an event space above the light rail stop and dividing a ballroom into multiple meeting rooms.

Because the Charlotte economy has been booming, uptown hotels have found they can make more money on regular business travelers. That has created a conundrum for the CRVA, whose mission is to put “heads in beds.” How much should the city invest in conventions when the hotel industry is doing well, mostly on its own?

But there are a number of new hotels under construction, and Murray said an increased supply of hotel rooms should increase demand for conventions.

“We have 1,000 hotel rooms under construction,” Murray said. “We think those things are correcting themselves.”

Conventions and conferences have become lighter on exhibits and instead emphasize technology and flexible meeting space as well as an overall experience that connects attendees to the host city. In the latter sense, Charlotte benefits from the convention center being located uptown, within walking distance of museums, restaurants and sports venues.

Posted by ElectricWeb-Atlantic at 7:47 AM No comments:

A massive $400 million medical tower that will soon be built at 509 Biltmore Avenue will be the largest construction project in Asheville’s history. 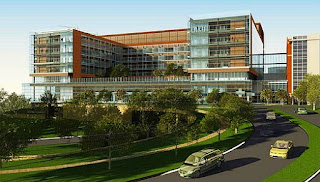 The new tower will allow to Mission Health to shutter its aging St. Joseph’s campus and consolidate all operations on the newer Mission campus side of the operation.

Last year, the City Council voted its approval to Mission Health to build a new 12-story, 681,000 square foot tower, which will include new operating rooms and an emergency services department.

The project’s architect is HDR and the general contractor is Turner Construction.

The project’s large size meant it required a Level III review under the city’s Unified Development Ordinance and a council vote.

The tower would have frontage on Hospital Drive and Victoria Road, replacing the St. Joseph’s hospital campus, which is on the opposite side of Biltmore from most of Mission Health’s facilities.

That has meant at times patients are transported by ambulance across the busy road.

The hospital began seriously looking at changes four years ago. The facilities at the St. Joseph’s facility were aging out, and there was a need for a new emergency department.

The St. Joseph’s facility is outdated, cannot accommodate new technology, and would be too costly to renovate.

The tower project on the Memorial Campus achieve cost savings by eliminating the duplication of services required to maintain facilities on both sides of the street, as well as to improve patients’ experience and safety by eliminating the need to transport them back and forth.

Construction on the tower, which will have two floors underground, is set to be completed in November 2018.

City planning director Tod Okolinchany said it will be the biggest project Asheville has ever seen. “The Asheville Mall exceeds 900,000 square feet but was completed in phases over several years,” he said.

The tower will have 216 beds, and services such as a heart catheter lab and endoscopy, intensive care unit and medical-surgery recovery floor, along with a cafeteria, an 84-bed emergency room, and support offices.

The project calls for retaining walls as high as 28 feet in some places. To soften their effect, the hospital plans to use plants and design elements.

There are also plans for a small park area at the corner of Hospital Drive and Biltmore.

The former St. Joe’s site will later be redeveloped to provide needed affordable housing, as well as commercial use and retail shops.

Posted by ElectricWeb-Atlantic at 7:47 AM No comments:

MED-EL Corporation, a medical devices company that develops and manufactures ear implants and speech processors, has broken ground on the company’s new U.S. headquarters at the Meridian business park in Durham, North Carolina. 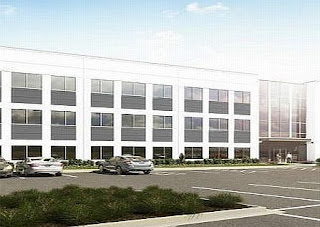 The Durham based manufacturer will be the anchor tenant for the three-story $18 million office building at 2645 Meridian Parkway that’s being developed by Herndon, Virginia based American Real Estate Partners, owner of nine other buildings inside the Durham corporate park.

MED-EL president and CEO Ray Gamble says that by the time the 57,000 square foot building is complete, they may need all of the third floor space as well.

“We’re the second largest cochlear implant company in the world, and we’re not going to settle for that,” Gamble says. The new building is expected to be ready for move in by September 2017.

Gamble says the company had briefly looked at options for moving outside of the Triangle, “but we’ve been in Research Triangle Park for 20 years, and it’s been good to us.” Plus, the company is still in close proximity to two of Med-El’s largest clients, the UNC Health Care system in Chapel Hill and the Duke Health system in Durham.

American Real Estate Partners have started making plans for another potential build to suit office building project on another lot it owns at 2540 Meridian Parkway.

“We are at about 96 percent occupancy right now, and we hope to keep it that way,” says T.J. Sevier, AREP senior vice president of asset management. “At the same time, we have a lot of tenants who are growing within the park. “

Posted by ElectricWeb-Atlantic at 7:45 AM No comments: