Three Big Developments to Get Underway in Alexandria

Everyone knows that suburban D.C. is undergoing dramatic changes, in part, because of a plethora of long-awaited development.  For several years, developers have been planning to construct massive projects in the Alexandria area to escape the higher building costs in D.C., and soon, these three new developments will get underway to welcome even more new residents to the neighborhood... 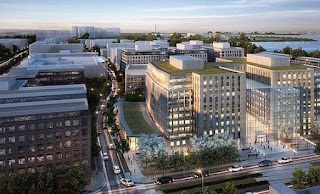 The JBG Cos recently announced that it will construct a 1.2 million square foot mixed-use complex in the first phase of its enormous redevelopment of North Potomac Yard.

JBG is shooting to have a portion of it open in 2020, when the nearby Metro station comes online.

Streetsense is architecture firm designing these spaces, which will replace the existing multiplex and surrounding parking lots.

Ultimately, JBG aims for 7.5 million square feet of total development upon completion of the final phase. 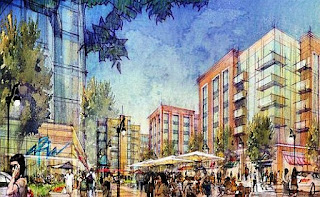 On a 16-acre tract of industrial park opposite Potomac Yard on Route 1, Stonebridge-Carras is planning an ambitious 1.5 million square foot mixed-use development.

The first phase is slated to be complete in summer 2019.

The development site is part of a planned 20-acre industrial park known as Oakville Triangle - which sits across the street from another huge mixed-use project, Potomac Yard.

Oakville will be roughly a quarter of a mile away from the future Potomac Yard Metro station, which is expected to bring an influx of new residents and development.

As part of the plan recently approved by the Alexandria City Council, Stonebridge has also committed to $2,000,000 in improvements for Mount Jefferson Park, $7.8 million in on-site affordable housing, and $1.6 million to upgrade the intersection of Route 1 and Glebe Road.


The Gateway at King and Beauregard 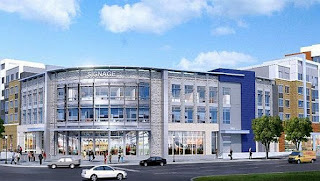 The Gateway at King and Beauregard, will soon be constructed at the intersection of the similarly-named streets.

Additionally, the Gateway project will include a 25,000 square feet office building over the retail space, 278 residential units over the Harris Teeter Supermarket, and an interior pedestrian plaza.

The Gateway will be marketed as transit-accessible because it is on the alignment of the future West End Transitway: the $140 million bus rapid transit system that will link the Van Dorn Street Metro station with the Mark Center, Shirlington, the Pentagon, and everywhere in between.

Posted by ElectricWeb-Atlantic at 7:35 AM No comments: